For over 40 years Andy De Looze has specialised in offering precise repairs and setups to the guitar community. Andy takes pride in doing fine and detailed work. From a basic set-up to a complete re-fret and most things in between! He is skilled in this area & it’s often been said that ‘he has the patience of a saint’ when it comes to the macro setups he does.

Known as ‘The Action Man’ (For somewhat obvious reasons!) Andy has many repeat customers who bring their pride & joy to him to get the best possible or preferred action set-up.

In his own words, “It’s the really small things that make a huge difference in a guitars playability”

Also at RGG, we carry stocks of the majority of replacement parts for the job, so it saves you valuable time & frustration in hunting down that elusive part & in-turn means that our repair turnaround is pretty fast.

Please check out the prices below, but if there is any other area of repair that you require, please just contact Andy through the contact link on our home page.

‘Honestly can’t put the guitar down since getting it back, you sir are a legend.
The best feeling guitar I’ve ever played’. That was the first thing that sprung to mind after picking up my first guitar build from Andy. He gave my guitar a new bone nut, a full clean and polish and a final set up that made sure that this guitar is going to be my number one for the foreseeable. I can say with full confidence that Andy, whatever the job may be, is your man. Thanks Andy for all your work, I’ll be back!

Hi Andy, just want to say that I have managed to have a quick practice session this afternoon on my guitar, and even to my novice standards I can instantly see a vast improvement to its playability. So thank you again for all the modifications you have made on it, I am already looking forward to practicing again later tonight! One very happy and satisfied customer. Thank you,
Nick

I asked Andy to work on my Tele and Strat.  The quality of Andy's work was absolutely outstanding and by far the best these guitars  have played as a result .  I would whole heartidly recommend Andy for any guitar repairs you may have.  Thanks again Andy - marvelous job!

Just wanted to say a massive thank you for repairing the guitars for us a couple of weeks back. They are all set up beautifully and are a joy to play.

My client was also very happy with his Yamaha and I told him I’d send you a thank you message..

Will see you again sometime.

Andy at ‘Really Great Guitars’ provides an A1 guitar repair service and is now my go to, to maintain and care for my guitar collection.. First job was a complete overhaul on my 2010 ‘60 Custom Shop Les Paul, providing setup and a few tweaks leaving the instrument gleaming and playing like new.. I’d bought the instrument SH and was astonished how much this work lifted the playability and presentation of the instrument.. I’ve always been a Fender man, but this might have changed my mind. Highly recommended service and Andy is incredibly knowledgable and passionate for guitars which clearly reflects in his work.

Just had mine and Carolyn's main acoustics set up, plus a little extra work. The Martin had a full fret dress, along with setting the neck relief. The Guild needed the action lowering and straighten the neck. The frets are polished and soooo shiny, fretboards lemon oiled, strung with brand new D'Addarrio 11-52's and they both quite literally sing and play like butter! I'd like to thank Andy De Looze and Really Great Guitars  for the fantastic work and quick turnaround, just brilliant! If you're in need of a skilled luthier, acoustic and electric, then Andy is your man, you won't find anybody more friendly, helpful or professional. 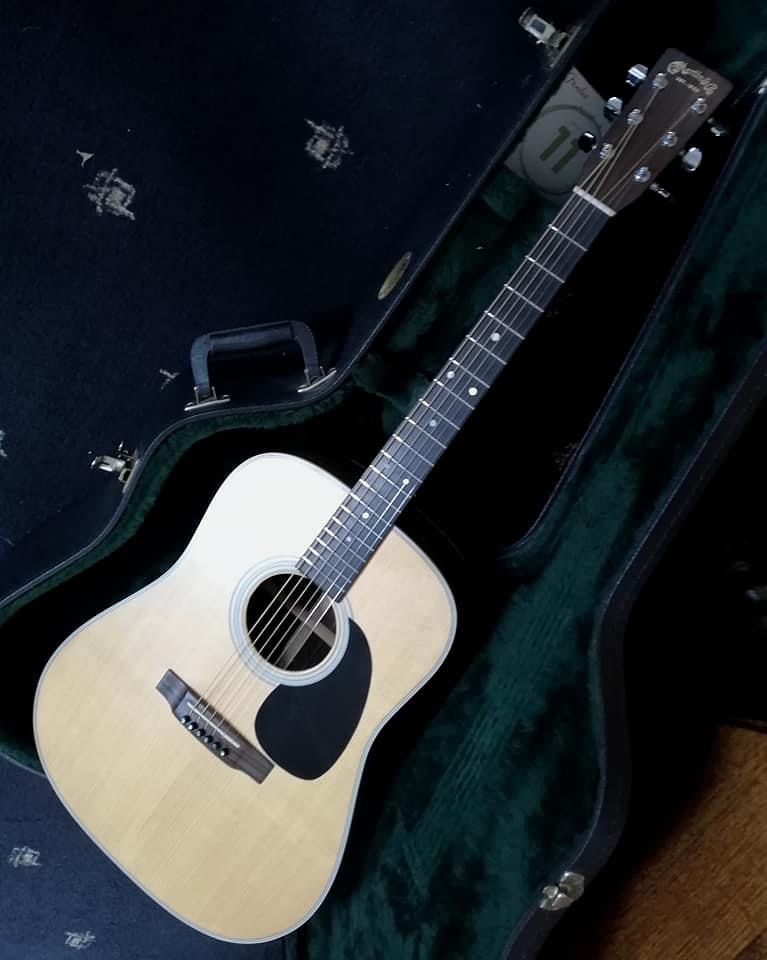 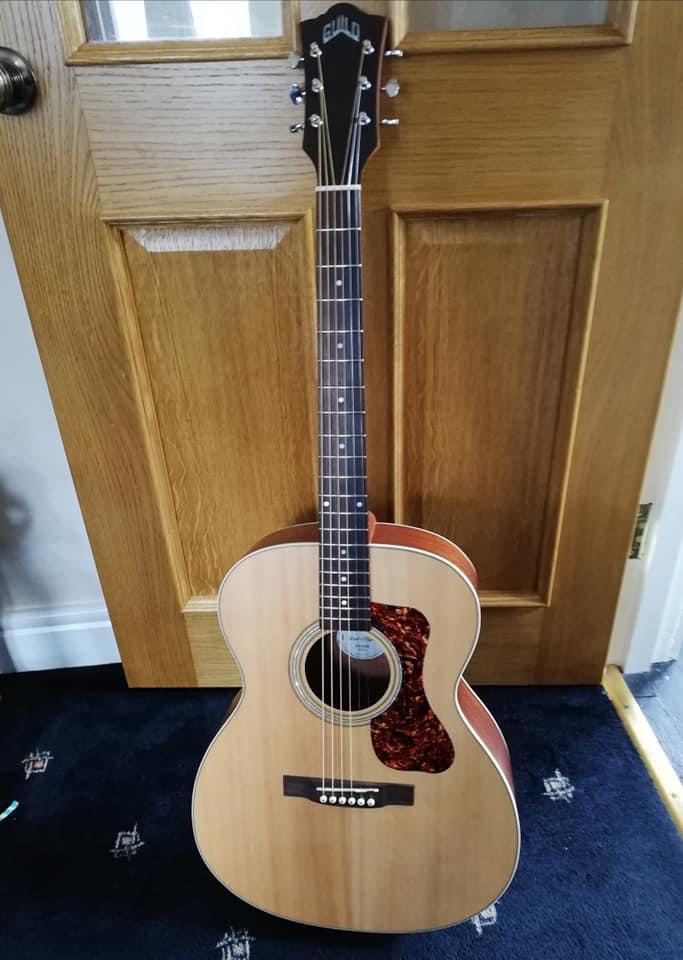 I took my 1970/72 Gibson J40 to Andy. It really was in a sorry state. The bridge had lifted the top, which subsequently cracked.
The neck was bent, and the truss rod had been tightened so much it had disappeared into the neck! In short, the guitar was unplayable!
Andy raised an eyebrow, rubbed his chin, and said “Yeah, pretty sure I can sort that out!”!
To be honest, I was sceptical, as I’d been fairly close to putting it in it’s case and forgetting about it forever.
Anyway, fast forward 2 weeks and I went along to collect.
Absolutely astonishing! The truss rod was shimmed and working, the neck was straight, and the top crack was solid with cleats fitted and a small injection of glue.
The bridge had been brought back down with the fitting of a device called a 'Bridge Doctor' flattening out the top.
The guitar now plays beautifully and has a sweet, quite gentle tone.
Great job!! 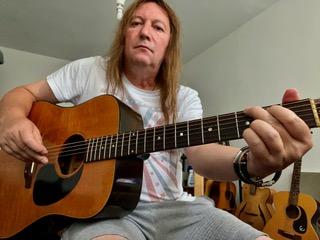 Fender Starcaster refresh
I bought an original 1974 Starcaster on eBay. When it arrived, it was filthy! All the pots crackled, dirt was everywhere, and the previous owner (who I understand was a chef on a cruise ship!)
must have played it for years wearing a large ring on his left hand as all the finish on the neck near the fingerboard had been worn away, leaving a razor-sharp serrated edge of varnish along the full
length of the neck. Very uncomfortable to play!! Andy took the neck off, feathered the edges to get rid of all the rough parts, oiled and waxed it, and polished the frets. The electrics were cleaned and checked,
neck re-fitted, and a full setup carried out including intonation. I have hardly put this guitar down since! 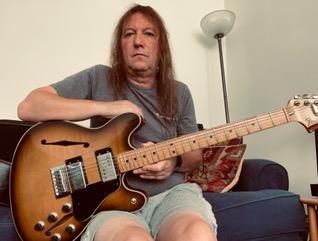 My guitar (Gibson Les Paul Std) had developed some age-related problems, dead spots above the 12th fret and string buzz on the top E, 4th and 5th fret, Andy was recommended to me by a fellow band member. I got my baby back a few hours ago, plugged her in and, wow! Smooth, clean and singing like an angel! Thanks to Andy, and my 87' stat plus will be on its way to you soon.

Couldn’t recommend Andy highly enough. Does great work and is a pleasure to deal with! Will be taking all my guitars to him from now on.

Thanks for the fantastic work you did on my guitars.
The ‘79 Antigua Strat is sounding and playing as good as the day it was new. The set up on the Guild F512e is just perfection.
And finally, the ‘62 Fender Japan Strat is now ringing out perfectly after you micro adjusted the tremolo arm. Will have more on there way to you soon.
Thanks again and best regards,

Recently sent more guitars to Andy for setting up, pick up replacements and to identify an annoying microphonic sound from a 1990 Charvel 475 which was coming through the Marshall and making recording difficult. After some detective work Andy identified the problem to be the trem cavity and inserted foam around the trem which cleared the issue. Never heard of this before but it shows his vast knowledge of guitars to be able to rectify a problem with what seems a strange, but effective, fix! Can’t recommend Andy enough!

Dear Andy,
First of all, thank you for your recent prompt service and meticulous attention to my Tele’ set up and modification.The added Humbucker pick-up and pots gives the versatility I was looking for.
I m delighted with the work done and cannot wait to show off the end result once some knd of public musical performance is possible! 2020/21 has been a real test of patience to be sure for all of us..
May I also say how pleased my wife, Sylvie is with the work you did on her semi-accoustic Fender ‘Montara’. This is one of her most cherished guitars that accompanied her (pun intended) throughout her career in America.
The attention you gave to my ‘sickly’ Fender Strat’ was excellent too. Having seen the state of it when I opened the case after eighteen months of storage I feared the worst but it was handsomely restored in your safe hands.
So, full marks to you Andy for all three instrument repairs.
I thoroughly my recommend your services to all your customers,
well done!
Thanks and respect to you, Robert Fielden-Nicholls.

I recently had a pretty substantial crack in my acoustic guitar while travelling, I had 5 days in worcester to get it fixed. Andy at Really Great Guitars could not have been better, within 3 days he had all the work done beautifully and had her back in my hands at a very reasonable price for the job that needed doing. Cannot recommend him enough. And on top of that he's a pretty top bloke!

Hi Andy. You were recommended to me by a friend, who couldn't sing your praises high enough. Well, I'm singing your praises now. Good communication, good service and good workmanship. Prices very fair. So thank you for being a great guy.

“Into my 2nd year now of taking my guitars to Andy. Each time my guitars return playing like a dream. This time had my Acoustic ‘electrified’ with a powered under-saddle pickup. Very neat job & electronics so discreet. Always friendly and helpful advice received and quality of workmanship is constantly top-notch. Won’t use anyone else but Andy who really is a Guitar Wizard”