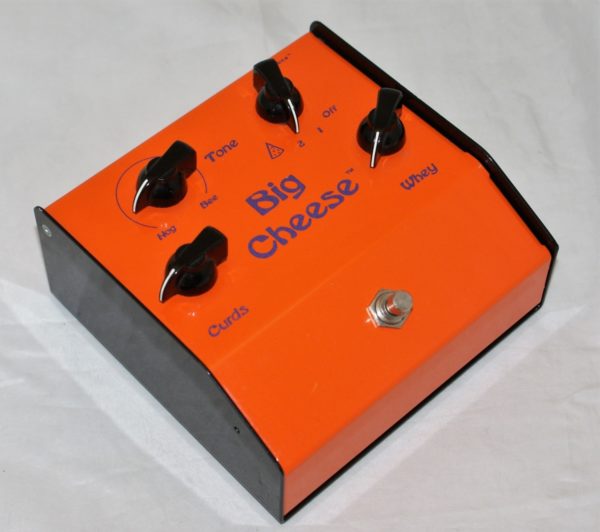 This is an extremely sought-after and iconic British made fuzz pedal and no longer in production.

These are being advertised at anything up to and over £1000. Can post worldwide.

As used by The Edge, Johnny Marr, Robbie Robertson, Steve Hackett and many more, the BIG CHEESE™ is a loving homage to the nasty, buzzy yet gorgeous and harmonically rich early fuzz. While having many of the classic characteristics that every fuzz fan will relate to it goes beyond to create an absolutely distinct character of its own. Its innovative and interactive controls can take it from almost “gated” break-up to overkill of shred proportions. Far from being just a guitar pedal however the Big Cheese™ is eminently useful for seeing to any sound with the temerity to be naff or boring (with particularly amusing consequences in the lower regions). To lovers of that extraordinary spectacle known to some as “furrrzze bass!” it offers terminally thunderous, ripping yet glitch-free and buttock-clenching mayhem that can only be described as Larry Graham on steroids (as demonstrated to devastating effect by the man himself!).

The Big Cheese™ works exceptionally well in the fx loop of the Meatball™ creating some of the squelchiest curdled sounds ever – particularly true of the “cheese” setting which gives the signal huge dynamics thus cutting through a mix like the fattest, raspiest analogue synth. Coupled in this way with an octaver it can perform an uncanny impersonation of a guitar synth with no delay or tracking worries.