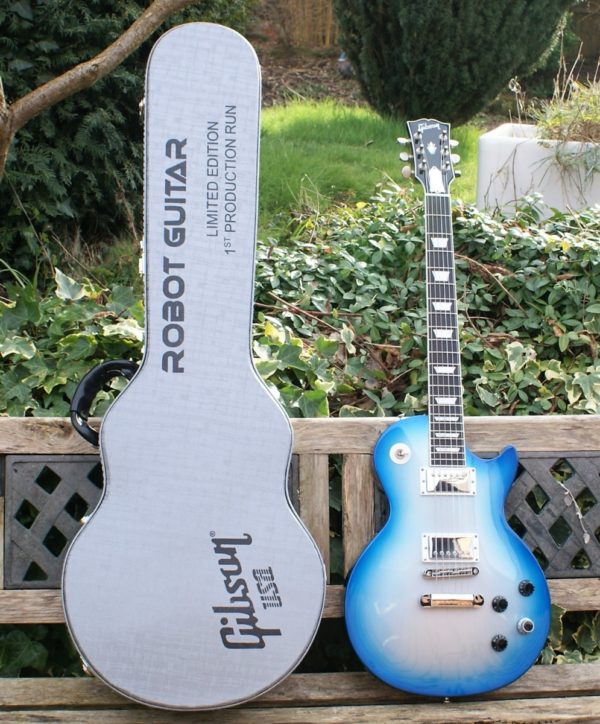 Now for something completely different!

Firstly, before we explore the guitar & its obvious playable attributes, let me say that the auto tuning mechanism does not work! It appears that the previous owner had disconnected it & used the tuners manually, which many people do seem to prefer to do, but in doing so, he has disturbed the functionality of the auto tuning system! My engineer has had a very close look at it & replaced the battery pack, as that was missing (Probably removed, due to the previous owner not wishing it to leak!!) & spent quite a few bench hours trying to figure out the problem, but to no avail, as its quite a specialist field of electronics! We have also contacted Tronical, the company that manufacture the auto-tune system, to try and ascertain the problem. but they have not replied to our emails at this time!  So basically, now when you engage the auto function, the lights on the rotary push-pull bridge tone control knob light up, but for some odd reason the signal is not being transmitted/received to the head gizmo that controls the auto tune facility! I’m sure that if you really required the auto-tune to work, then you could pursue it further, but it does not stop the guitar from being tuned manually. All you have to do to tune it manually, is just pull the tuning keys out slightly to “unplug” it from the robot mechanism & they operate as standard tuners, or of course you could just replace the tuners with a standard set for little money.

Therefore, as Tronical are not forthcoming with a reply, we have decided to offer it up for sale in this condition (This is reflected in the asking price!) If you can get this up & running, it would be worth circa £1,500, as these are true collectable guitars now.

Now onto the guitar itself:

This is a beautifully playable Gibson Les Paul, the action and overall playability is superb & the two chrome covered humbucker pickups (Alnico ll 490R, 498T) really kick. She weighs in at 8.2lb, so nice & comfy to hold. This guitar has little or no wear & tear, just some slight nitro crazing around the knobs & toggle switch, but all-in-all she is close to mint condition. Her frets are 100% perfect & she comes with her limited edition silver case, COA, charging adaptor & even her original shipping box. If you do get the auto-tune working & want to charge the Tronical system up (It still has charge in it at this time) you will just require a standard 9v power supply, they can be bought for as little as £5.

Regarding the history of this guitar then below is taken from the original media launch blog:

These limited edition Les Pauls, featuring Gibson’s amazing self-tuning robotic technology, launch globally on December 7, 2007, at select dealers, each of whom will have only 10 of these beautiful guitars. If previous limited run releases are any indication, they won’t have them for very long.

Each limited edition, first run Gibson Robot Guitar will feature a dramatic Blue Silverburst nitrocellulose finish, created especially for this limited run. It will never be used on any other Gibson guitar. Also featured is a certificate of authenticity, a power adaptor for the system’s rechargeable lithium battery, and a limited edition first run case with silver tolex and a plush silver interior. Each Robot Guitar’s serial number will also be sequentially exact, beginning with “RG0001,” and continuing through the end of the limited run.

Many of Gibson’s limited run models of the 1950s-guitars that could be purchased for as little as a few hundred dollars-now command huge sums of money as some of the most desirable collectables in the industry, and the same is proving true with Gibson’s recent limited runs. If history is any indicator-and it usually is-the Robot Guitar will soon join the ranks of such models as:

The limited edition, first run Robot Guitar will certainly follow in the footsteps of these legendary Gibson instruments.